It is with regret that I have to report that my cat, Jack, has now passed on. He was found in someone’s back garden where he had staggered to after he was hit by a car on our street. 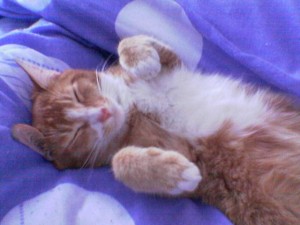 They say that cats can leave paw prints on your heart. Truer words were never spoken. Jack will be missed deeply.

Keeping my promise… so far

Well here’s another diary entry, the 2nd within a week. That doesn’t happen too often. I haven’t had much free time recently what with having to go to work at unsociable hours and everything. I have, however, had the time to be introduced to a very peculiar game called Sentient, a 1st person 3D role playing game, dating as far back as 1997! Our lass bought it for her PC and she’d been having trouble getting it to run under Windows XP because it was originally made for Windows 95! A quick visit to the compatibility settings in XP soon solved that but it’s blocky as hell! It’s rather amusing though because it contains some of the best insults ever to be coded into a video game (“GO EAT YOUR FEET!!”) , as well as having actual realistic scripts for all the characters in the game (“The teleporter’s knackered!”). END_OF_DOCUMENT_TOKEN_TO_BE_REPLACED

…but not much more to report. I’ve sorted out my server computer so that the webcams are running their live feed of myself now. In fact, I’ve added a 3rd camera to the site so there’re three feeds all at once 🙂 Albeit I had to reduce the resolution of the feeds in order to get three webcams working at the same time on a PII machine 24/7 but I’m quite impressed with it, now more than ever. END_OF_DOCUMENT_TOKEN_TO_BE_REPLACED

Back up and running once more!

Have you noticed something? Since November, this space was completely empty. But now the site is alive and kicking again! Not only that, but the Nemo and zxoncam websites are also back up again. I finally got round to paying my hosting bills and just look at me! A fully fledged webmaster once more! END_OF_DOCUMENT_TOKEN_TO_BE_REPLACED