Merry Christmas everyone! Remember everyone… you’re not HAPPY at Christmas, you’re MERRY! And don’t stoop so low as to call it Xmas… and definitely don’t go as far as saying Happy Xmas because it just doesn’t work at all!

So what did I get? A bottle of JD (which won’t last long!), a mini fridge, a coffee maker, a fair bit of money… ooh, what else… oh yes, and this… 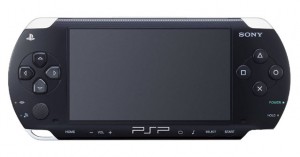 I also got GTA: Liberty City Stories with it too. It’s so unbelievably close to the PS2’s GTAs its scary! I think I might go get another game or two though because, even though GTA is brilliant, I don’t think I could play one game over and over again continuously.