A year of Wii Fit 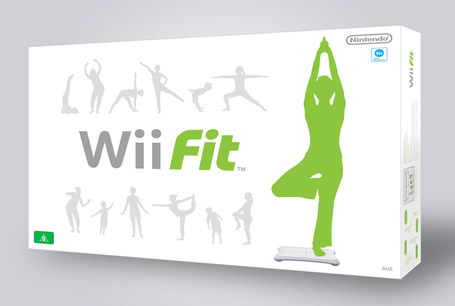 It was a year ago today that I bought Wii Fit after hunting all around the shops in Middlesbrough, only to find it in the very last shop I was going to check (Argos). Now, a year later, how have I done?

My BMI when I first bought it was at 25.47, slightly overweight. Now, let’s be honest, I barely used the Wii Fit when I first got it. It was only every couple of days that I fired it up and did anything even as small as just weighing myself. It only came into it’s stride when I decided to do something about my weight (again) four months later, at which point it became a valuable asset.

365 days after buying it, my BMI has dropped to 22.16, which is 23lbs lighter than I was when I bought it!! 23lbs!!?? That is fantastic news!! What this doesn’t tell you though, is that my weight loss is even more of an achievement because I’d put on weight between the day I bought this and the day I decided to go back on the diet. However, I’ve found this to be an excellent tool for my diet today, and I can’t help but feel a sense of accomplishment when I look at my weight on a line graph spanning over the last eight months. 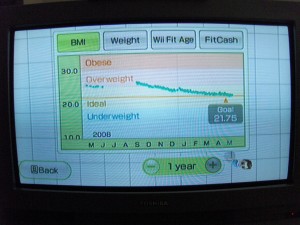 One thing that disappointed me a little was that the game didn’t make a fuss over having being played with for a year. It celebrates when it’s your birthday, and when it’s Christmas and New Year, but not when you’ve spent an entire year standing on what is currently the most expensive controller ever made. Surely it could’ve said something like “Hey, we’ve known each other for a year now. How have you done since we first met?” and then display the difference in weight between now and then.

I don’t think I’ll have done as well on my diet as I have done if it weren’t for easy access to an accurate piece of kit, even if my proper use for it was somewhat delayed.

So for all of you out there who have parted with £70 to get Wii Fit and feel bad for not using it as much as you should… don’t worry. It will come into it’s own when you need it the most! 🙂