While I was on holiday, Clare and I popped over to Boston to get some steak, mince, and eggs. This doesn’t sound all that interesting by itself, but I’ve missed out one important detail. Everything… was Ostrich!

That’s right! Ostrich steaks, Ostrich mince, and Ostrich egg! We had the egg the next morning, along side boar sausages and… well, regular bacon. And it was pretty much no different. So, I took some home and made a meal from it…. and here it is! 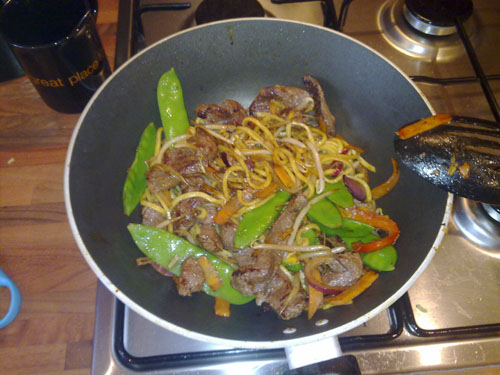 I’m told that Ostrich tastes like Beef, so I made a Black Bean Stirfry with it. Conclusion: It was quite nice, but I couldn’t shake off the fact that I was eating an entirely new animal. It does taste like Beef, but there’s a bit of an aftertaste that I simply can’t describe. I think, if I didn’t know it was Ostrich, I’d clear the plate and be satisfied with the meal.

I’ve got a couple of steaks and some mince left, so I’m gonna try a Spaghetti Bolognese next. I think the tomatoey sauce will rid the Ostrich of it’s aftertaste. I’ll report back here when I make it.