I’ve had a terrific Pay As You Go tariff over the last few years: top up £15 per month and in return I got 300 free texts and 150 cross-network off-peak minutes included. I arranged with o2 to get 500Mb of data per month as well at £7.50, so half of my monthly credit was taken up but, because of the included texts and minutes, the remaining credit was barely touched. Since it was PAYG I didn’t even have to top up every month either. When I had a lot of saved credit, I’d go a month without topping up, so I save £15 every 3 months or so. I was even getting 10% of my top ups back every quarter, thanks to o2’s Rewards scheme. On top of that, I got 15 free picture messages every month courtesy of o2 Treats. As you can see, it was an excellent all-rounder tariff.

Over the last few months though, I’ve been noticing that I’m sending more texts, making more calls, and finding my credit has been running down more and more than normal. A few times I’ve even topped up twice in a month, when before I’d sometimes only be topping up once in a two month period. It seems that I’ve finally outgrown the tariff after all these years, and it’s time for a new one. On top of all that, my Nokia N97 is really starting to show it’s age. It’s a neat phone with a good physical keyboard, but it’s horribly slow (so much so that I’ve lost my temper with it on more than one occasion) and no one seems to be making apps for Symbian now; it’s all iOS and Android these days. Looks like a new phone is on the cards as well. What’s the easiest way to do both at once? Move to Contract…

I haven’t been on a mobile contract since the days of Genie (remember them?), when I got a Nokia 9110i Communicator for £200 on a 12 month £15/month contract. It had completely free texts and WAP internet (remember that??) but, as it turned out, the call charges were extortionate. As a result, my monthly bill would be £50-60+ nearly every month! When I couldn’t pay it, I’d be cut off for a few days, sometimes a couple of weeks, before I could pay the bill. This experience had taught me to stay away from a contract, as they will inevitably be more expensive than they appear. That’s why I’d been on PAYG ever since, and I’d been happy with the fact I knew exactly how much I’d spent or had remaining at any time.

Having said that, my situation now is very different to back then. Firstly I was in college/university at the time. My income was limited, at best. Any money I got in was from either working in a club or bar, or from my student loan. This explained why I couldn’t always pay the bill, and why I was able to pay £200 up front for the phone. Secondly, contacts weren’t quite so competitive with each other back then. Networks would set their prices and leave it at that, and the public would go with whichever network had the best coverage in their area. These days, networks are constantly fighting with each other in order to get as many customers as possible. Since network coverage is generally on a par across all of them now all over the country, consumers now have the choice where to go to, and the final decision is almost always a financial one.

It’s now my time to make my decision on what to go for. The first decision was to pick a phone I wanted to have for the next 18/24 months. Every network has a different selection of mobiles and, if I were to pick a network, I first had to pick a phone. I was interested in getting a Nokia N8 or E7, which both run the new Symbian^3 OS and will be upgraded to Nokia Belle very soon. The sad truth though, is that Symbian is only being supported by Nokia until 2015, and most other developers have stopped supporting Symbian altogether. This is a huge shame, as I’ve been using Symbian powered Nokias for 10 years now, and it’s an excellent OS with loads of fantastic options you don’t get on other OS’s, and has a colourful history dating back to the days of the Palm Pilot.

The other choices I have regarding mobile phones include the iPhone. Sure, it has a good screen, and a pretty UI, but the fact remains that you have to do everything through iTunes. iPhones also have built-in batteries which can’t be removed without voiding the warranty. If they go capoot, I’d have to send my phone back to Apple (at a price, I bet, as well) so I’d be without my new phone for god know’s how long. Also, the Apple App Store is run just like a dictatorship. A developer’s app can’t be on the store unless Apple themselves have given it the thumbs up. To top everything off, Apple contract smaller companies to build their phones for pennies, and pressure them so much that the employees have been committing suicide!! Basically, I don’t want to be paying over the odds for something that’s worth bugger all, I don’t want to be limited by what apps I can install and how to install them, and I don’t want to contribute to any suicides due to company pressure. Blackberrys have the benefit (well, most of them) of having physical keyboards on them, so I won’t be victim to auto-correct. Sadly, they’re rather unusual in design and don’t have a lot of apps available on them. Finally, they’re mostly used by teenage girls. Somehow, for me, that doesn’t have great appeal. The Windows Phone OS doesn’t appeal to me either. Although it’s quite pretty, smooth, and didn’t bat an eyelid when I tried the onscreen keyboard when I was in a phone shop, I found it overly simplistic. This then leaves me with Android. It’s open-source, has few restrictions on their app store (aka Marketplace), speedy, feature-packed, and comes in a variety of different form factors.

OK, so I’ve decided on Android… now WHICH Android? I’ve got an Android tablet running v3.2 (Honeycomb), and I know practically every Android out there now is running v2.2 (Froyo) or v2.3 (Gingerbread) and Honeycomb is exclusive to tablets, so the best choices would be to go for either a proven reliable Gingerbread phone or take a bite out of Ice Cream Sandwich (v4.0). Ice Cream Sandwich (ICS) is only available on the new Galaxy Nexus at the moment. I’ve managed to have a play with one in a Vodafone store, and I was very impressed with how it looked, felt, and behaved. I’d even go straight for a Galaxy Nexus but it’s new on the market. Getting one would mean either paying a load of money upfront, or getting a stupidly expensive contract. The only other option is to go for an older, more reliable Gingerbread phone; one that’s proven itself to be an excellent all-rounder. This is in keeping with what I told myself in the final months of using my Nokia N97. I got my N97 the day it launched. I was amongst the first in the world to get one, and took a chance with a whole new phone that’d not had a chance to prove itself. Sure enough, it turned out to be a flop. Sure, I’ve used it for longer than any other phone I’ve had, but it’s had it’s pitfalls. I don’t want to take that chance again, and besides, ICS would be released for other phones in due time anyway. 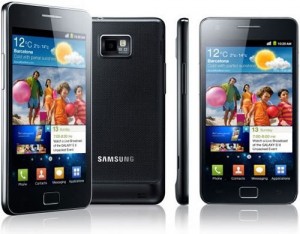 After much deliberation, I decided on the Samsung Galaxy S2. It was voted the best Android phone of 2011, and has specs that are greater even than my Acer Iconia A100 tablet! It’s been out for quite some time now, and has had high-scoring reviews everywhere I look. A friend of mine even owns one and I was very impressed with what it was capable of, not to mention with how stupidly slim it is!! I knew that it wouldn’t be long before Samsung release another Galaxy S phone, so that should keep the price down. The next problem was that, because it’s such a popular phone, it was available on every single network in the UK. I hunted high and low for days on end, only to decide to stick with o2, my current network. This was down to a number of factors, including the fact they offered me the best tariff. The tariff I found was £21.50 per month for 24 months, with 500 free texts, 100 free cross-network onpeak/offpeak minutes, 500Mb data, and they asked for £29 upfront for the phone. This was a slight bump up from what I had before (except for the minutes), and I could consider the £6.50 difference per month as my “payment” for the phone. £29 for the phone is better than £400+ buying it myself…

…but then I found a doozey of a contract on Phones4U’s website! Get this… o2, 24 months long, £21.50 a month, unlimited texts, 200 minutes onpeak/offpeak per month, 500Mb data per month, NOTHING for the phone upfront! Basically, its the same price per month as before except I don’t pay anything upfront for the phone, I get twice as many minutes and a bucketload of texts! I’d checked over my usage of my PAYG over the past 6 months and I didn’t even come close to this, so I knew from the moment I spotted it that I wouldn’t have the same problem as before and get shocking bills every month. An added bonus is that, since it’s the same network as before, my current PAYG credit goes towards the bill! I’ve got enough credit at the moment to cover 1 1/2 month’s of the bills, so I won’t actually start paying until February/March. It was part of Phones4U’s January sale, so it wouldn’t be around much longer.