I have four guitars in all, and you can read up about them on this page. Yes, I know some of the photos look terrible. Sit tight and I’ll get round to it. 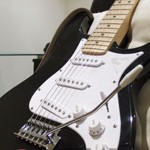 I picked up this guitar at a car boot sale in April 2011. It was purely by chance that I spotted it. The seller was someone who renovated old guitars and had a bunch of them on sale. Although it’s classed as a beginner’s guitar, it seems to have many of the configurations you’d expect from a regular Stratocaster. It sounds really nice but it’ll take me a while to get used to it. Many have said to me that I couldn’t have chosen a guitar any more different, in both sound and responsiveness, to the Les Paul I’ve used all these years. This guitar sounds absolutely goegeous! I’ve always liked the sound of 12-string acoustics and now I have one! I bought this guitar late August 2007 at Middlesbrough Music Centre in my home town from “Uncle Tony”. Normally what put me off getting one was trying to get my head around how to tune it but he helped explain it. Essentially the 6 main strings are the same, and the extra 6 strings next to them are the same not but an octave higher, except the last two E and B strings (which are the same). Playing arpeggio on this baby is heaven! 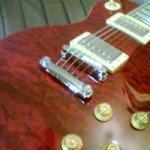 I bought this guitar with the money I got for my 21st birthday. I was in dire need of a new guitar. I’d had the Rickenbacker for a good 8 years and I felt as thought I had to move on (of course, the signatures on the guitar was another factor I had to take into account). I’ve always loved Les Pauls and hope to be the proud owner of an official one some day. Still, this guitar is definitely a step in the right direction. When playing it, it feeds somehow soft on the fingers, and it sounds amazing! This is my very first guitar and I’m still proud of it. I bought it from a friend when I was in secondary school, and it came with a diddy 15watt amp (which, by the way, is really crap!). It’s been everywhere and played all sorts of different songs, although because of the way it’s designed, it’s not quite that simple pulling off solos. I feel that it’s more of a chord playing guitar to be honest. It’s helped me get my claim to fame though. Feeder was playing one night at The Middlesbrough Arena when I was working there. I took the opportunity to get my guitar signed by the group, including the new deceased John Lee.